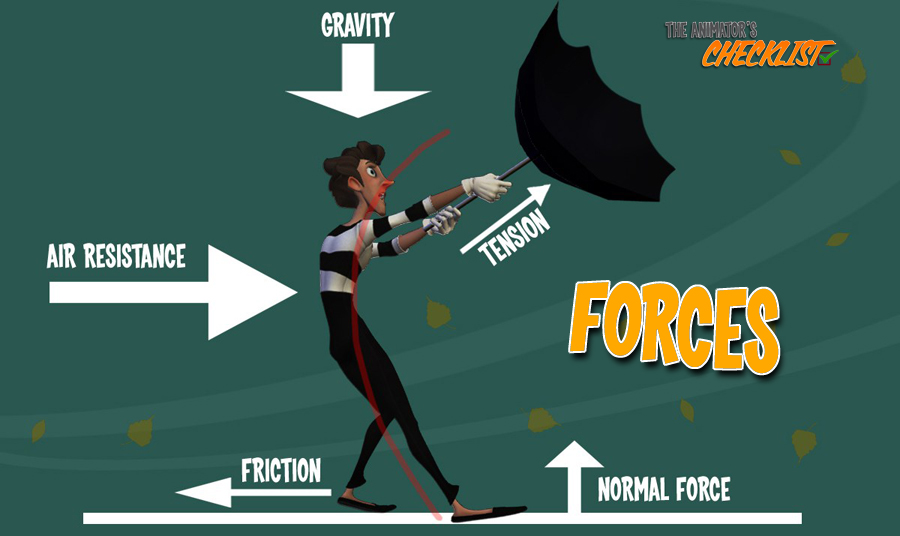 Hi everybody,
We can often watch some students works which are not credible because of a lack of knowledge or misinterpretation of forces.
We all had to face one day this famous criticism “Your animation is too floaty” or “It lacks weight, it seems the character is under water!”
One of the biggest problems in the animation if placed in the correct interpretation of the body dynamics, that's why I think it is useful to understand the origin of this mechanic: the Forces.
Those same forces define everything: Timing (Timing, Spacing) poses (Anticipation, Reaction, Balance, Squash/Stretch) and movements (Arcs, Overlap, Residual energy, Inertia, Action/Reaction, Slow in/out).
All the work of biomechanics is a direct response to the interpretation of the forces. 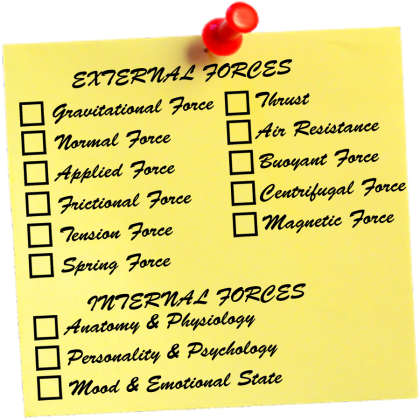 EXTERNAL FORCE
A character have to fight against those external forces:

Gravitational force or Gravity: Attractive force exerted from a mass to another, and affects all bodies. (For example, a character in the gravitational field of the earth is attracted by her)

Normal force: Type of contact force exerted by a surface to an object. This one acts perpendicularly and outwardly from the surface. (For example, the thrust exerted by the ground on a character and prevents him to go through)

Applied force or "Drag": External force acting directly on a body. (For example, a character pushing an object)

Friction Force: Contact force acting to avoid the sliding movement between surfaces. It acts parallelly to the surface and opposite to the direction of sliding. (For example, the friction that produces ground on the feet sole of a character will be different if the floor is made from earth or ice)

Tension Force: State of a body subjected to the action of opposing forces that attract him. (For example, the force that receives a rope being pulled by two characters)

Elastic force or "Spring": Physical ability of some objects to change shape when a deforming force acts on them . An object has the ability to return to its original form when deformation stops. (For example, a rubber ball subjected to an impact or in other words, the principle of squash and stretch)

Thrust: Reaction force quantitatively described by Newton's third law and based on action and reaction. (For example, the force exerted against a gun and makes it recoiling the exact same magnitude as the force driven by the bullet.)

Aerodynamic force: Force suffered by body moving through the air, and, particulary, the component of the force in the direction of the relative velocity of the body in the environment. (For example, the air resistance felt by the character while going at high speed)

Buoyancy or "Upthrust": Also called "Buoyant Force", is the upward supporting force on an object immersed in a liquid (For example, the force that receives a character in water and allow him to float)

Centrifugal force: Fictitious force that occurs when the motion of a body is described in a rotating reference system. (For example, the force that perceives a character being in a wheel)

Magnetic Force: Interaction that occurs between electrically charged particles.(For example, the attraction a character in armor receives being nearby a giant magnet)

INTERNAL FORCE
To fight agaisnt all those forces, a character had those faculties:

Anatomy and physiology: Joints and muscles a character have (For example, in 4 fantastic, "the Thing" will have a totally different way to move than the "Elastic man" due to his morphology. I will comment more on this in next article BODY DYNAMICS)

Personality and Psychology: Personality of a character that will define his attitude and determine its line of action and movements (For example, a Bugs Bunny even very depressed will always move faster than an energetic Droopy)

Mood (Mood): Reasons and motivations of a character when he has to do an action (For example, If a character is sad, it will cost him much more to do any kind of action and fighting external forces than if he were happy)

NOTES
According to a classical definition, a force is any agent capable of modifying the amount of movement or shape of materials. Nothing moves without a force, your job is to understand why things move !

6 comments “FORCES or What are forces to be taken into account in animation?”