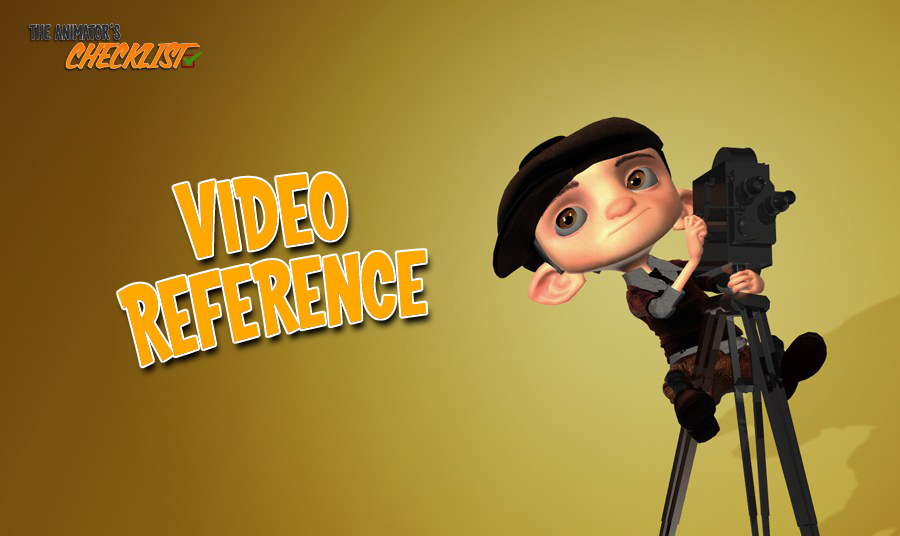 I made my own reflection and wondered:
·         Is it essential video recording? No, but personally I recomend it even though it depends on the type of production and style of the project.
·         Is it reliable? The information may differ depending on the angle and the video quality or the performance.
·         Is it copying or rotoscoping? Not at all!!! the video reference, as the name suggests, is a reference to analyze the poses and movements and then “caricaturize them”.

In any case, It seems to me as an essential tool when investigating, plan and communicate to your director your intentions.
Personally, It brings me so much when creating my shot that I usually even record myself several times.

TYPES OF RECORDING
If I have got enough time and depending of the shot, I usually record myself in 2 diferent ways:
Acting Recording
In the planning stage, I search for the performance without worry of displacement. I try to act naturally, feeling the character and trying movements, poses, rhythms and secondary actions.

Body Dynamics Recording
Once I have my acting closed and I have a doubt about the body dynamics, I record my displacements to understand where is my weight, balance and fulcrums and how I use my body to move.

Like any process, I think you can speed it up and I do not usually take more than 15 minute record me, once I have prepared my notes and materials. 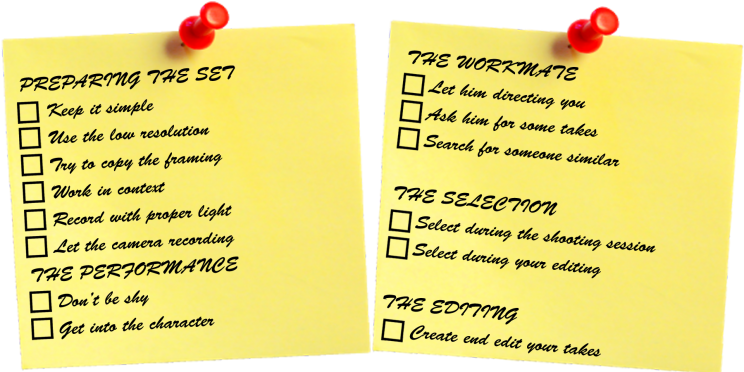 THE PREPARATION OF THE SET
Keep it simple
With only a webcam, a mobile or a laptop is enough. You're not going to shoot a movie, you don't need a last generation cam. Besides, try to avoid any coding or transfering process.

Try to copy the framing
Put the camera on a tripod and try to simulate the framing.

Work in context
Put the audio with the anterior and posterior shots or put a few seconds of silence to act without being hit by your audio.

Record with proper light
Be sure that the place wherever you are recording is well lit to see your movements.

Let the camera recording
At first we are usually conscious of the camera and don't feel comfortable. Let the camera roll until you forget to it… you will select the good takes and edit the video later on.

THE PERFORMANCE (See How to explore an acting?)
Don't be shy
Some feels uncomfortable when recording because of shyness, lack of confidence or because they think they don't know how to act. Well, I guess if you known how to act perfectly, maybe you have lost your destiny…In any case, nor is what they ask you and the recording is first of all to help you. Try to force yourself to go in front of the camera, perhaps the first time it will cost you 1 hour to get 3 seconds of interesting material. But with time and habit, you will go faster and like many others you will enjoy the process.

Get into the character
Do everything possible to get into the mind of your character. Try to record in a similar environment and use items, props or similar clothing. If the character is accompanied on stage, ask a partner if it can act with you. Put some reference points to simulate the heads of the other characters and avoid problems of hook up or focusing points.

THE WORKMATE
Ask for help to a fellow…
Let him directing you
Put your partner behind the camera and let him do the job of director. You will have immediate feedback, avoid errors and go much faster in your research.

Ask him to make some few takes
Sometimes, we can surprise by the acting choice or secondary actions of someone who comes with a fresh eye on the situation.

Search for someone similar
Know your limitations and ask a mate who has less trouble recording or similar physic or attitude than the character you are animating to act for you.

THE SELECTION
I usually filter my recordings throughout the process:
Selection during recording
After some takes, I look at my camara to see if I touch the essence of my performance and what can I improve.

Selection during editing
Returning to my sit, I analyse my records and I'll take the most interesting takes or parts.

Selection before submitting to the director
If I still have doubts about the version I want to present to the director, I ask my colleagues and I let them tell me which appear to be the more appropriate.

THE EDITING
Create and edit your takes
The advantage of having an edition is to select the best takes and combine them to have a super-take. Also during the process, director may request a change or you will need to put a variation of the performance.

I will explain in detail how to read a video reference and explore an acting in the following articles.

I hope that was usefull…

4 comments “VIDEO REFERENCE or How to create a video reference?”