It is easier to detect bad timing problems rather than to explain how to do it right, Yet I think from my point of view, it's like the sense of rythm, it's quite innate.
Basically, the timing is the time for a moving object to go from an extreme (Key pose) to another one...,  If there is no timing, there is no life, just movement…
Although it is one of the key principles of animation, if you search information about it you will find few material, And most of them only speaks about its definition or the typical the bouncing ball example.

That's why, in order to create a checklist, I tried to find out what were the real goals of timing:
• Clarity
• Credibility
• Entertaining 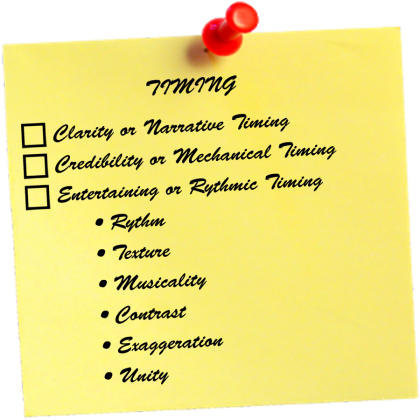 CLARITY OR NARRATIVE TIMING
The first thing you have to find, you must be sure that the actions can be readen perfectly and the purpose and message of the director are respected.
After making a first adjustment of timing, you will have to ask yourself:
Have I told one thing and only one thing at a time?
Have I used the timing to focus the viewer to the center of attention and not confuse him?
Have I respected the personality and character of the character definimg the speed of his movements?
Have I thought about the poses as beats that define my shot?
Am I sure that the viewer can follow the movement clearly?
Have I prepared enough the audience for what is going to happen and I've given enough time to anticipations and reactions to read the action?
In the same way, I've tried not to take too long to tell an action, which makes the audience get bored or lose the focus?

ENTERTAINING OR RYTHMIC TIMING
Perhaps the most complicated part, is to seek that the movement is readable interesting and visually pleasing. You have to try to exaggerate the timing and rhythm to help communicating the emotion and message.
For that, we have at our disposal those “weapons”:

Rythm :
How actions and beats are spaced along the shot. You can also call it “tempo”.
Have I avoided a predictable rhythm?
Have I avoided having a rythm too repetitive and boring?
Have I created a visual rhythm with the character through the shot?

Texture :
The variation of timing, spacing and breaks in the shot. If we put all the ideas with the same intensity and strength, none of them are going to be interesting.
Have I played enough with texture to make my shot credible and interesting?
Have I tried to have changes and variations in my actions : small and large, fast and slow?
Have I put some holds moving to rest the action and emphasize a pose?

Musicality :
Harmony in evolution of the actions. There is a great relationship between music and animation, when you are planning think about it as if you were writing a music score.
Does the rhythm that I have chosen supports the emotion and message of my shot?
Have I thought about my animation as a musical composition, with its changes and variations?

Contrast :
To help us with the phase of rhythm and texture, we have contrast to allows us finding variations.
Have I tried to find staccatos ( abrupt changes with dynamic contrast) in my animation?
Have I managed to avoid any repetition?

Exaggeration:
As in posing, you must exaggerate the concepts in timing: slow slower, fast faster…
Have I exaggerated enough my timing?
Have I tried to push to the limit my concepts and ideas,?

Unity : and finally, check if everything works together.

NOTES
• Things are moving for a reason. In the same way, the characters think before moving:  give them life and a reason to move.
• Be carefull not having too many concepts in your animation, this will make your timing too fast and none of your concepts are going to be readen.
• The big characters or objects tend to be slower because of their weight, mass and inertia. In the same way, a small character will have faster movements.
• Every emotion has its own timing, an happy character will have a faster timing than a depressive one. Other emotions as distrust, doubt or confusion, will have a long pauses.
• Be carefull of not having Staggered Timing, wich means having several characters with the same timing and things arriving at the same time.
• We are used to some rhythm patterns, a good advice would be to break those patterns, Surprise the audience and create expectation!

TIPS & TRICKS
• A great trick by Victor Navone is to always have in a shot 3 speeds: fast, medium and slow. That will give texture, emphasis and interest to the shot, If you have different body parts moving at different speeds, better!
• Draw your timing: There are some plugins that reacord a mocap of the mouse and allow you to test different types of rhythms.
• When you are working on a pantomime and you don't have an audio that limit you, Try to speed up your timing to be more interesting.
• If you must make a move that can not be recorded, take reference on reality and exaggerate it.
• Use interior monologue as a timing tool, if you have trouble to find the timing of a blocking, record an interior monologue audio and reference use it in your 3d soft.

16 comments “TIMING o What are the 3 Keys to a good Timing?”